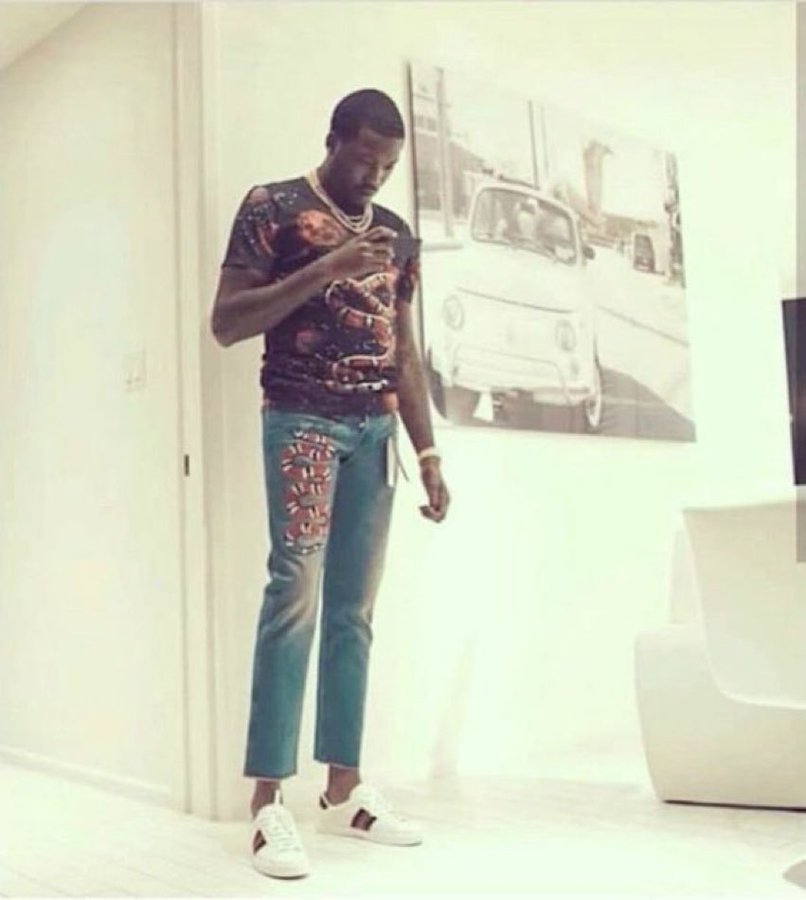 "Nigga been tweeting bout my man for a year now. Talking bout he went to my page to see him but he was blocked," Minaj continued. "My nigga, move on. I know ya btch embarrassed. Shitted yaself in that store when u got pressed tho."

Minaj's onslaught may have been sparked by news of Meek liking a meme about Minaj's husband, Kenneth Petty. Along with her tweets, Minaj took to Instagram where she claimed that Meek is abusive towards women.

"You a [clown]. U do IT for likes," Minaj wrote on her Instagram story. "#TwitterFingers beats women, scared of men."

It wasn't long before Meek responded. In a series of tweets, Meek refutes Nicki's claims and singles out Minaj's brother, who is in jail for child molestation.

"The only way you can try to kill my career is to say I beat women ... talk about ya brother convicted of rape and you been knew and paid for his lawyer ... ya little brother touched that lil girl too! You know I know ... you want me to crash with ya boyfriend and I won’t," Meek wrote. "You sad you willing to crash your man because you losing now and everybody in the industry know you a bad person! You been knew your brother was raping that little girl that’s why I got away from you!"

The back-and-forth continued, when Minaj accused Meek of being violent towards both her and women in his family.

She also invoked her brother's situation and implied that extortion was involved.

"Imagine talking about an alleged rape of a child to hurt someone who wasn’t involved just so ppl can dislike me. You can never stand on your own," Nicki wrote. "You won’t tell ppl the mother is on tape asking me for $20 million to make the charge go away tho. U was around. U know. See u soon."

Then it was Meek's turn, when he accused Minaj of trying to "destroy" him with the allegations of abuse.

"Surrounded by rapist talking what? stop playing you picked a great time to be saying I ever put my hands on you," Meek wrote. "you full of hate and the whole industry know you full of hate... and ya bag getting low so you wanna destroy me."

"I can’t believe y’all industry people let these people survive this long in the game knowing they really nasty people and have a nasty upbringing," he continued. "Everybody really know what’s going on! I’m powerful I’m never scared to speak up!"

Meek and Nicki's rift deepened following last month's incident at Maxfield in West Hollywood, when Minaj, Petty, and Meek shared words before Meek was escorted out of the store. There are conflicting reports on the situation, with Minaj's team saying that Meek was staring at her and her husband prior to the argument, while Meek insists that Petty and Minaj started the altercation.